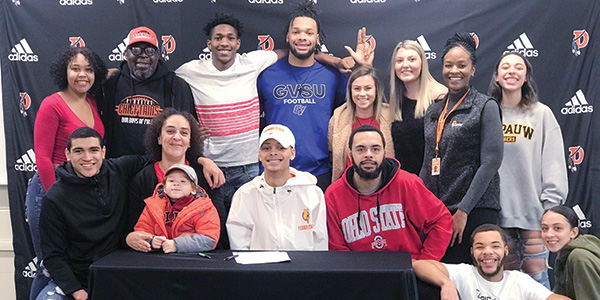 Cailyn Murphy is surrounded by family, friends and teammates as he signs his national letter of intent with Ferris State University. (Submitted photo)

DOWAGIAC — Senior Cailyn Murphy signed his national letter of intent to continue his academic and athletic career at Ferris State University in Big Rapids on Feb. 12.

Murphy is no stranger to the Ferris State program as his brother, Carl Grant, signed with the Bulldogs in 2014, but would later transfer to another school.

“It is all about family, commitment, and it is a winning program,” Murphy said of his picking Ferris. “Where else would you want to be?”

He plans to study criminal justice.