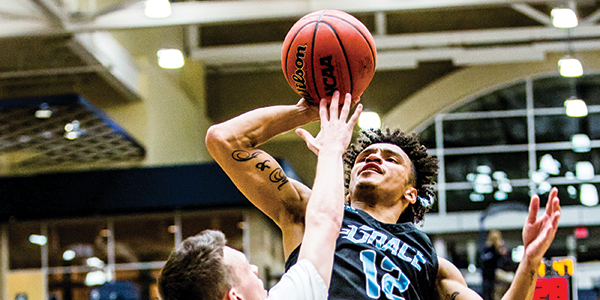 GRAND RAPIDS — The NCCAA II No. 2-ranked Grace Christian University Tigers closed out their home schedule Feb. 11 with a bang, defeating the No. 1 Great Lakes Christian College 96-84 in front at the Aldrich Athletic Center, which was at capacity.

After a very evenly played first half, the Tigers held a two-point lead headed into the break. The Crusaders stormed out in the second half on a 9-0 run to quickly take the lead, but the Tigers answered with a 19-4 run to take the lead right back, and they would hold on to it for the rest of the game. Great Lakes would trim it down to as many as three points, but a huge 1-and-1 conversion from Hank Schemmel would ignite a spark in the Aldrich Athletic Center crowd and Grace’s bench that seniors Austin Jackson and Adam Kregel would carry on the rest of the way. Jackson was nothing short of dominant in the paint for the remaining minutes of the game, and Kregel knocked down three of his seven three-point shots on the night during a final run that would blow the lead open to as many as 15 points and result in a 96-84 win for the Tigers.

Fittingly on senior night, four seniors would lead the way for the Tigers in the box score. Jackson finished the game with a career-high 32 points on 14-16 shooting and 11 rebounds, recording his fifth straight double-double.

The Crusaders wrap-ped up their regular season with a road trip to Kentucky, where they defeated Boyce College 83-70, Campbellsville-Somerset 64-62, and Campbellsville-Harrodsburg 87-60.

Grace will take an 18-11 overall record and an 11-1 in NCCAA DII mark into the NCCAA Mideast Regionals in Nashville, Tennessee Feb. 27 through Feb. 29.

The NCCAA Nationals are set to begin March 12 in Joplin, Missouri.