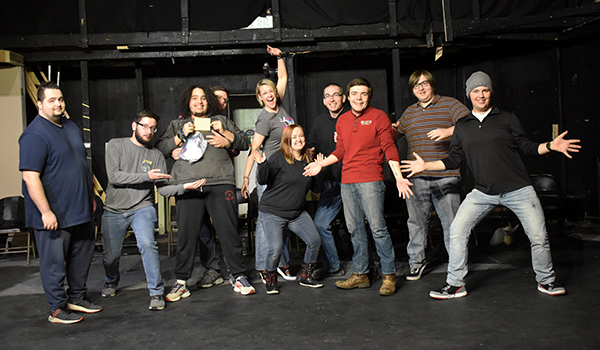 DOWAGIAC — Next weekend, the Beckwith Improv Group will be leaping into its sixth annual improv weekend.

What started as a risk spearheaded by directors Ryan Murray and James Huffman five years ago has since evolved into an annual group of improv performances.

The Beckwith Theatre will host four improv shows next weekend, beginning at 7 p.m., Friday, Feb. 28, with a family-friendly improv show. At 9 p.m., an adult-only show will commence with mature content. On Saturday, Feb. 29, shows will follow the same schedule with a family-friendly open to all ages at 7 p.m., and an adult-content show at 9 p.m. Directors encourage interested show-goers to call ahead to Beckwith Theatre for reservations, (269) 782-7653.

Throughout each performance, audience suggestions will be used in a variety of games that help give structure to the shows.

“The games are the setups for the scenarios,” Murray said. “None of the lines are pre-rehearsed, and there are no memorized lines. It’s just making it up on the fly around certain parameters of certain games that make the setup of the situation.”

During rehearsals, the directors see which castmates work best with each other, and different actors like different games.

The directors said improv could be a niche show for some of the Beckwith Theatre’s audience.

“A lot of people only come to the improv shows,” Murray said. “Some of the audiences’ first time they have been here is for the improv shows. We have gotten some new regular audience members because of improv. I would say 75 percent of our improv audience is interested in seeing an acted-out theater play, and that is okay as long as we are doing some sort of entertaining.”

This year, the improv group is missing a few members of its core cast who have been involved since day one.  However, directors said the performances have new faces every year. This year, the cast is a slightly smaller group compared to past years.

The average age of cast members is also younger this year, Murray said, as several recent high school graduates have joined the group.

“That is great and brings in a fresh perspective,” he said.

When it comes to improv theater, Huffman said chemistry is crucial.

“If two people are acting out a scene and they don’t trust each other, the scene is probably not going to be as good as it would be with two people who did trust each other,” he said. “Chemistry is like numero uno, and second is understanding the framework of each game, then the rest is eating cake.”

As the directors stood on stage, they reflected on how far their improv performances have advanced. The first year of improv sold out with standing room only. They expected it not to happen the following year, but it did.

Murray believes the reason behind improv’s success is timing. Beckwith’s regular stage season is from April through fall and sometimes goes into December.

“There are the winter months where we are still paying to heat this building and have electricity, and no income is coming in,” Murray said. “It was one of the main reasons we were okay with starting this. It was to generate income for the theater during the lean months before there were any regular plays. It’s done that, and it’s been a nice little bit of cash flow at a time when there are only expenses.”

DOWAGIAC — A check presentation kicked off a Dowagiac Union Board of Education meeting on Monday night. Debra Cahill, the... read more