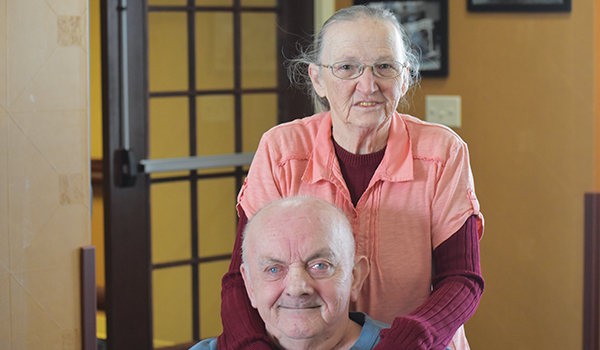 DOWAGIAC — Inside the Timbers of Cass County, Duane and Marlene Lietz spent their Valentine’s Day together.

The couple, married on April 4, 1986, will celebrate 34 years of marriage this year. As Lietz sat on a couch and Duane in his wheelchair, the pair reflected on their time together and offered advice to other couples.

Duane, 73, and Marlene, who turned 72 in January, first met at a bar on Main Street in Benton Harbor.

“She had gotten off work, and instead of going home, she had stopped at the bar,” Duane recalled.

“It was so hot that day, and when I got off work, I said, ‘Well, I will go stop at the highway bar and get an ice-cold beer,” Marlene said.

It was not love at first sight for Marlene, who had exited a rough marriage three years before.  The couple’s relationship has not always been smooth sailing. Just four days after their wedding, Duane suffered a toe injury. In 1989, he had a brain tumor removed.

“I think that stuff bought us closer together,” Marlene said.

The couple’s hardest hurdle might be the one they faced that brought them to the Timbers in the first place.

Duane suffered a fall in the couple’s bathroom. It took Marlene and her brother more than an hour to help Duane. That is when Marlene knew she needed help taking care of her husband.

“It was hard for me to decide,” Marlene said of Duane living at the Timbers. She makes trips to see him twice a week. “I know he misses coming home, but I can’t take care of him.”

The couple has lots of other loves, too. Before Duane suffered from a series of strokes, they used to go out dancing. Nowadays, Marlene said there are fewer places to dance. The place they used to go had a live band, she said.

The couple’s other love included hunting for bottles and pop cans, cleaning them out and taking them to the store to collect the money.

“It really was a hobby,” Marlene said with a smile.

Another love of Marlene’s involves taking care of her miniature dachshunds. One dog named Babe will be 14 years old in May. Her other dachshund, Star, will be 12 years old in March. Her last dog, a mixed breed of a Pitbull and boxer, is 16 months old.

Now, as the couple sits hand in hand, the advice they can give to others is to pull together and have trust.

“Trust goes a long way,” Marlene said. “Then, love is the other most important thing. You got to love each other. If you don’t have that, you might as well hang it up.”

The last piece of advice the couple offered was if you argue with your spouse, never go to bed mad.

“It’s good advice,” Marlene said, “If you do have an argument, it’s better just to make up.”

DOWAGIAC — Residents of the Dowagiac Rotary Villa, a senior subsidized housing unit which opened in 1988, are now getting... read more