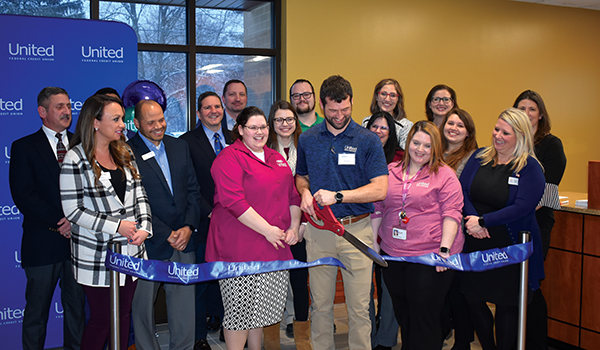 Thad Payne, United’s regional market development manager, kicked off the reopening near the branch building’s new counters. He noted that the branch was the birthplace of the now-80-year-old financial institution.

“It carries a lot of pride for us, of what we started here in Buchanan, and we want that pride to be here for our members — also our community,” he said.

Payne and Beckman both said the renovations were would not only better service but show the credit union’s appreciation for its parent community.

Before, the credit union’s main space was “colder,” Beckman said. The room was dimly lit, and a single, long service counter made coming to deposit a check or create an account seem transactional.

Renovations were meant to make visits feel more personal and personable. Beckman said those experiences are a key component of a credit union, whose members own the institution.

Now, United’s Buchanan branch has multiple counters, some lowered so residents can sit and speak with a teller with an added layer of privacy. The space also removed its wallpaper, flooring and lighting for varieties that had warm colors.

Other updates include new pillars and a single entrance, rather than two, for better safety, Beckman said.

Altogether, the updates make United a “beacon” for community residents, he said.

Payne said he often asks Buchanan businesses what qualities make for a strong local institution. He said they tend to respond with Buchanan hometown values: honesty, integrity, selflessness and a hard work ethic.

“We’re happy that we get to live in a community like that, and we get to carry those values, too, in a place that we all get to call home,” he said.

Beckman said United has made strides to be more than a service to credit union members.

Each Friday, it offers free popcorn. Many staff members can also be found volunteering — Beckman said he himself volunteers for riverfront cleanups and United Way events.

United is also working on expanding into a new community, South Bend, and constructing a new headquarters at the former office of Whirlpool Corporation in St. Joseph.

NILES — Opening CJ’s Pizza and Subs two weeks ago was a homecoming for Jeff Harrell. About 10 years ago,... read more