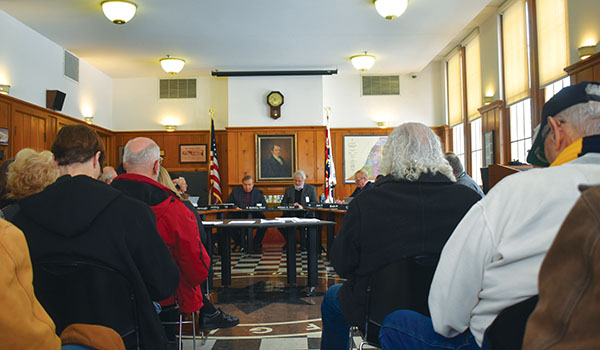 ST. JOSEPH — Late Thursday morning, the Berrien County Board of Commissioners unanimously voted to reaffirm the commitment to the Bill of Rights they took as elected officials.

The resolution came after four weeks of discussion among members and input from county staff and Berrien County residents about the Second Amendment, which grants people the right to use guns.

Discussion began at a Jan. 16 board meeting when Baroda resident Jim Walker sent in a draft resolution. It designated Berrien County as a sanctuary for the Second Amendment.

Eight of 83 counties in Michigan have designated themselves as sanctuary counties. Walker’s proposal reflected some others, giving the county prosecutor and sheriff the right to disregard unconstitutional firearm laws.

Some opponents of such resolutions note that if a gun law is deemed unconstitutional, it no longer becomes a law. They instead see sanctuary resolutions as ways to bolster opposition to laws that regulate gun ownership, such as universal background checks and bump stock bans.

David Vollrath, who represents Coloma, made a motion to the board to accept Walker’s resolution, but no other commissioner seconded it.

Instead, the board unanimously voted to recommit to the Constitution’s first 10 amendments, with a special emphasis on its Second Amendment, that grant personal freedoms from the government. The motion was made by Michael Majerek, who represents Niles, and seconded by Mamie Yarbrough, who represents Benton Harbor.

The resolution is symbolic. The county is given no additional authority to loosen or refuse to follow gun laws that state and federal law requires. If a law that regulates gun ownership passes, the board will still follow it.

The resolution will be sent to the state Congress, its members and Gov. Gretchen Whitmer.

Many board members expressed their support of the Second Amendment and the Constitution, but said it was against the law for them to oppose current Michigan and federal laws, as being designated a sanctuary county suggests.

Berrien County residents shared their support or opposition to both the failed sanctuary resolution and the passed Constitutional commitment resolution.

Resident John Schnable was not happy that the recommitment resolution passed. He said the only thing the resolution does is divide residents. It gives gun rights advocates the illusion that they are better protected, while increasing concerns of proponents of gun regulations, he said.

“All these people think that they’re getting something,” Schnable, a gun owner himself, said. “They’re getting nothing. They’re still going to have to go through the process.”

If people want to change laws or encourage laws to be made, they will have to go through state of federal Congressional members.

This was also the reasoning some commissioners shared before the vote, including chairman Mac Elliott, Teri Sue Freehling, Ezra Scott and Yarbrough.

Others opposed to the sanctuary resolution were the Berrien County Board of Health and Vicki Schroeder, who spoke on behalf of Interfaith Action, a coalition of faith communities in southwest Michigan that advocate for peace and justice.

Many attendees voiced their support for a sanctuary status.

Included was David Brelowski, of Niles. His support for bolstering the Second Amendment was rooted in his family being a victim of violent home invasion and robberies.

“I’m in favor of any words, any teeth, that can protect the way of life as what we know it,” he said.

So, too, did Jack Straszewski, who said the Second Amendment was under attack by politicians and people that wish to restrict gun rights. He said if these beliefs were realized, they would be akin to breaking a home improvement contract.

The notion that the nation was being threatened by gun regulation activists was a frequent talking point among those supporting, including commissioner Vollrath.

Commissioner Scott noted that two related resolutions were in Michigan House committees. One reaffirms the right for Michigan residents to keep and bear arms. The other designates Michigan as a Second Amendment sanctuary state.

EDWARDSBURG — A man wanted for murder in Indiana was arrested in Edwardsburg Tuesday evening, according to the Ontwa Township... read more