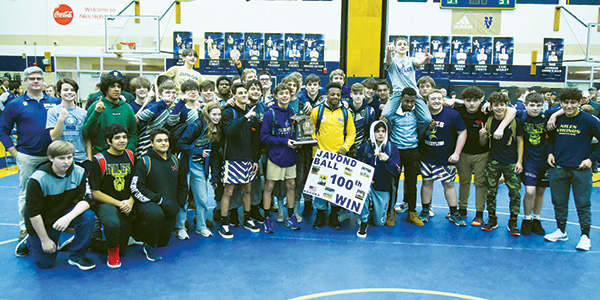 The Niles wrestling team won its second consecutive district championship, and its seventh in the past nine years. (Leader photo/SCOTT NOVAK)

NILES — For the seventh time in the last nine years, the Niles wrestling team captured the Division 2 district championship.

The Vikings defeated Sturgis 64-11 in the semifinals and then knocked off Edwardsburg 37-31 in the championship match Wednesday night. The Eddies rallied to beat Coldwater 39-38 in the other semifinal, which came down to the final bout of the match.

Each year, the Niles seniors have the pressure of continuing the tradition of championships and excellence on their shoulders. Each and every one of them are more than happy to take on that pressure.

This year’s class features 15 seniors. Not all of them took to the mat Wednesday night, but they have all contributed to a season that has resulted in a 14-6 overall record and a second straight district title.

For one senior, Javond Ball, it was an extra special night as not only did he help his team advance to Wednesday’s Division 2 regional at Battle Creek Harper Creek, but he picked up his 100th career victory.

“It means a lot to me,” he said. “We have been working hard all season. Coach [Todd Hesson] said it all came down to this, so it feels good.”

Ball said that it is the effort that everyone puts into the program, including the seniors, that make the difference.

“We all talk about it, but we know it comes down to coach making us work hard every day. It is a good feeling,” Ball said. “I was nervous going against Edwardsburg, because coach said it was going to be close. It was close, but we came out on top.”

Another of the Vikings’ seniors, Kade Wagley, said the senior class would not have it any other way.

“One of the big things about Niles wrestling, in my opinion, is that every year the year above us come in and beat the junior down, beat the sophomores down, and beat the freshman down, and we just keep building the program,” he said.

“So, when we go to the bigger tournaments like Eaton Rapids and Lowell, those kids are ready, and that is why we continue to excel. As a senior captain, I feel it is my duty to push the class behind me.”

Wagley was able to seal the deal for Niles in the championship match. He pinned Jeremy Walker in the second period to give the Vikings an insurmountable 37-19 lead.

He did not feel any pressure.

“That is just how we do it here at Niles wrestling,” Wagley said. “We come out and work our butts off the whole week, and we come out, perform and win big matches.”

Hesson was glad to see the senior come through when it counted. Wagley had hit a bit of a slump heading into the postseason, but responded in the team’s biggest moment.

“He did a good job,” he said. “We wrestled through some tough times, and we put it on his shoulders, and he came through. He gutted it out. He deserved to win this dual for us, and he did.”

Hesson knew Wednesday night was going to be tough.

“Edwardsburg did a good job,” he said. “They have been battling injuries all year long. That staff has put together a very competitive team. In some cases, it came down to the coin toss. It is always the same. It comes down to match-ups, coin toss and bonus points. Every time.”

The Vikings now set their sights on a third straight trip to the state finals as it heads to Battle Creek Harper Creek to face either Lakeshore or St. Joseph, which wrestled Thursday night.

In the other half of the bracket is host Harper Creek and Plainwell.

Wrestling is scheduled to begin at 6 p.m., with the championship match set for 10 minutes after the completion of the last semifinal.

NILES — For Dowagiac, the fun part of the wrestling season has officially begun with a district championship. On Wednesday,... read more