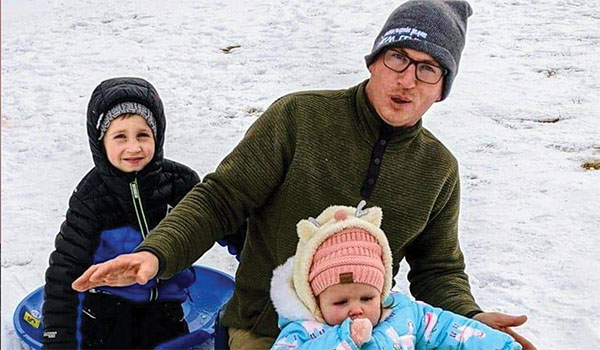 DOWAGIAC — One Dowagiac native is giving back to senior citizens during the winter season.

Bill Personette III, the owner of New Leaf Landscapes of Southwest Michigan, announced earlier this month his company would, free of charge, help shovel and snowplow senior citizens’ homes during the winter season.

Personette’s inspiration for the idea came from his great aunt, who was blind and would help take care of him and his siblings when he was young.

“She kind of had that sixth sense,” he said. “There were needs she had, and people would come and help her. I remember a cousin would come in and help plow her driveway.”

Personette remembers his great aunt always being on the phone with the Cass County Council on Aging, volunteering her time and speaking to other senior citizens on the phone.

“For me to be able to do this, it’s basically in honor of her,” Personette said. “I just thought it was something we could give back to the community. The guys that help me, we are all from Dowagiac. We have invested interest in the community, and it’s an honor and privilege for us to be able to do it.”

Personette’s experience with landscaping began at the age of 12 on his grandparent’s farm. He helped take care of the animals and the grounds. From there, he worked in the city of Dowagiac’s parks department during the summers in-between studying environmental science in college. He went on to work at a farm in Sister Lakes. In the early to mid-2000s, he was yielding many requests in the area for landscaping, so he took a leap of faith and started his own business. Shortly after, the recession hit.

“I realized I knew how to work hard but had no idea how to run a business,” Personette said.

In 2007, Personette got his company up and running.

The idea for his company name also came from his great aunt.

“She had these little tulip balls that she would dig up in the fall time, store them and put them back in the spring,” Personette said. “She would always say every year, ‘I’m turning over a new leaf this year.’ I didn’t want to attach my name to the business. I wanted something different and bigger.”

In 2009, Personette realized he needed a steady revenue stream. He went on to secure a contract with a township to take care of its cemetery. Today, New Leaf Landscapes of Southwest Michigan has four total contracts with cemeteries, works with The Woodlands Behavioral Healthcare Network in Cassopolis and maintains Lewis Cass Intermediate School District’s plowing needs.

For the past few years, the business has also shifted to a niche area — shoreline stabilization.

“It’s an unfortunate thing. Everyone is kind of in the same boat as far as having high water levels and erosion on their shorelines,” Personette said.

His company uses a natural seawall method to construct the sea walls with fieldstone.

From Three Rivers to Edwardsburg to St. Joe, Personette’s company has helped stabilize shorelines at lake homes. He would like to see his company eventually move to shoreline stabilization on Lake Michigan.

Currently, Personette is taking a course with the Michigan Inland Partnership through Michigan State University Extension.

So far, Personette has received calls from neighbors and family members asking him to plow several senior citizens’ homes. During the last snowfall, the company did its commercial routes and then pulled together at 8:30 a.m. to shovel six driveways. Personette can be reached at (269) 462-0966 or by email: newleafofswmich@gmail.com.