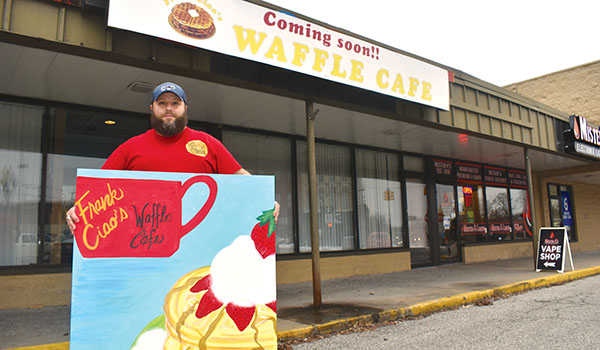 Now, 83 years after Fred Carbon began selling the mix, Anthony and his brother, Brandon, will make the product a staple of their Niles business, Frank Ciao’s Waffle Café.

“My biggest plan is to make this The Waffle House of the north,” he said.

His focus will be on quality food made from generational recipes and on an experience that will make diners want to come back time and again.

Anthony laid out his vision for the space that once housed a Chinese food buffet.

Customers will walk into a room covered in painted flowers made by South Bend artist and friend, Danielle Stevenson.

Then, they will enter the restaurant itself. Its décor will be “the 1930s meets the 80s,” Carbon said. It will draw from 80s movie theming such as “Back to the Future” and “Bill & Ted’s Excellent Adventure.” Intermingled between the colorful designs will be photos, paperwork and patent sketching from Fred Carbon’s formative years.

The waffle café’s name is an homage to a young Fred. When he came to the U.S. from Italy, he Americanized his last name, Ciao.

The Carbon family’s Italian heritage and cooking versatility is reflected in the café’s menu. From early in the morning to late at night, it will offer meals ranging from spaghetti and meatballs to burgers.

The staple, however, will be the waffles and their side dishes, Anthony said. The base variety is a classic Belgian waffle — Fred Carbon invented a Belgian waffle iron.

Some other variations on the dish include a peanut butter and jelly waffle, and a Norwegian waffle, a combination of heart-shaped waffle, fruit preserve and sour cream.

Anthony said the Golden Malted mix will make his waffles near perfect.

“You’re looking for that fluffy, but at the same time, a crispy golden brown in that waffle,” he said.

Carbon said he is well on his way to making his vision for the restaurant a reality. This week, overhead lighting and a sound system was installed. Stevenson began working on a mural, and contracted workers began installing new flooring.

He also recently hired his management team and is still accepting applications for cooks and wait staff through his front door and Facebook page.

The renovations and decisions come months after poor building options caused the Carbons to abandon their plans to open in Buchanan. While the brothers hope to open another restaurant in St. Joseph, they have no immediate plans to try again in Niles’ neighboring city.

Anthony said the pressure is on for him and his brother to continue the entrepreneurial legacy of the family, but he has no regrets about the venture. Seeing the “Oh baby!” expression on people’s faces when they try a waffle makes it worth it, he said.

“I feel like my brother and I, I think this is our true destiny to do this,” he said. “I think our grandfathers would be proud of us.”

As Anthony works on his longtime project, he and his staff will continue to post their waffle creations online and cook them from their future restaurants, tempting people in the strip mall he is part of.

ST. JOSEPH — Late Thursday morning, the Berrien County Board of Commissioners unanimously voted to reaffirm the commitment to the... read more