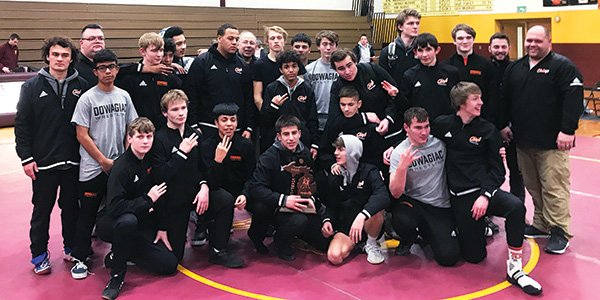 NILES — For Dowagiac, the fun part of the wrestling season has officially begun with a district championship.

On Wednesday, Dowagiac defeated Berrien Springs 84-0 to advance to the Division 3 district championship match against Brandywine, which beat Buchanan 51-30 earlier in the night. However, it was Dowagiac that took home the Division 3 title after defeating the Bobcats 58-21 in the title match. It was the Chieftains’ third consecutive district crown.

“We are just happy to be here and be healthy,” said head coach Colin Burandt. “This is our actual season, everything before this is a preseason for us. It feels good and we are excited.”

The past two years, Dowagiac has made it to the state quarterfinals. Last year, it fell to Dundee, which won state the previous year.

Headed into the district match, Burandt said his team got into the groove of things the past couple of weeks.

“I think we were pretty well set coming into tonight,” he said. “We knew the job we needed to get done, and I think we showed that we were ready.”

Performances from the Chieftains that stood out to Burandt included Tyler Huston’s 15-4 win over Brandywine’s Aaron Lauri in the 119-pound bracket. Earlier in the season, Huston was pinned by Lauri.

Another standout performance was Dowagiac’s Jordan Simpson, who wrestled against Brandywine’s Drake Heath at 103 pounds. Simpson had the quickest pin of the night at 25 seconds.

“I think he majored that kid earlier in the year, and to go out there and get the pin in the first period was huge for him,” Burandt said.

Moving forward, the focus for Dowagiac is to make sure everybody makes weight and shows up.

“We’ve wrestled almost pretty much every team we would see in the regional, so we know what we have to do to beat those teams,” Burandt said. “We are just staying fresh, keeping things fun and enjoying the process.”

Chemistry has also been important for the team as they move forward.

“We are a big family from top to bottom from the youth program to middle school to high school,” Burandt said. “Everybody cheers on everybody. You can see our team chemistry on the bench. Everybody is buddies. That’s important for building the program like we are and moving forward. Everybody knows that they are going to push each other to get better and make sure they are doing the right things.”

Dowagiac will travel to Hopkins, where it will face Wolverine Conference foe South Haven in the regional semifinals. In the other half of the bracket are host Hopkins and Constantine. Wrestling is scheduled to begin at 6 p.m. with the finals set to start 10 minutes after the last semifinal is completed.

CASSOPOLIS — Things are starting to come together for the Cassopolis boys basketball team. The Rangers have battled through injuries... read more