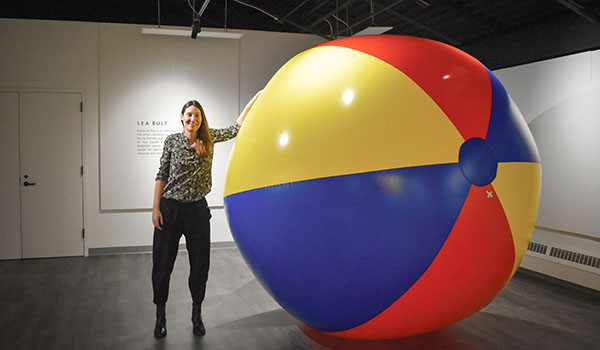 DOWAGIAC — In most art galleries, visitors are encouraged not to touch the artwork. However, a new art project in Southwestern Michigan College’s art gallery is encouraging the exact opposite.

In the rear gallery, Lea Bult, who teaches drawing and painting at SMC, has her exhibit “Room to Play” featuring a giant beach ball and a sign saying, “Please touch the artwork.”

In the front gallery sit pieces made out of clay and wire by Jan Kimball, who teaches courses in art appreciation, creative process and ceramics at SMC. Kimball called her exhibit “assigned meaning.”

Bult’s exhibit also features a collection of pieces inspired by her artist collective, Fun Squad, which was founded in 2016. The group has about 15 to 20 artists involved and has a mission to activate abandoned and forgotten spaces with “creative mischief” and to create an alternative gallery experience that is both inclusive and interactive.

Kimball has a master’s of fine art from the School of the Art Institute of Chicago. She has experience teaching at various organizations and colleges, including the Morean Art Center, Eckerd College, St. Petersburg College and Lake Michigan College.

Bult’s exhibit includes before and after photos that document the collective’s work.

“We find abandoned and forgotten spaces like warehouses, and we transform them with art,” Bult said. “It’s about generating economic interest in the Benton Harbor Arts District area.”

Bult said the collective is also about supporting one another as artists and hosting unconventional art shows.

The first space that the collective transformed is now the Ghost Light Theatre. Now, the collective has another space on the other side of the arts district.

“When you have 15 people all on deck at the same time and working together, it really wasn’t as daunting as it seems,” Bult said.

Bult said it is also essential for the collective’s shows to have an interactive piece. At the last show, the collective incorporated swings and a dance party.

Just a few feet away from Bult’s “Room to Play,” sit three clay and wire pieces by Kimball.

In one piece, Kimball was using random connections as an inspiration to etch constellations into silver clay.

“I had a friend who took the bus to work every day, and this guy she ended up sitting next to, she married,” Kimball said. “If she had a car, she maybe wouldn’t have gotten married.”

Kimball said she is always fascinated by those kinds of stories.

“I don’t understand those things, but I love them,” she said.

The two exhibitions will be on display in the art gallery until Feb. 27.

CASSOPOLIS — The case for a man who allegedly shot and killed a man in Dowagiac will be moving to... read more