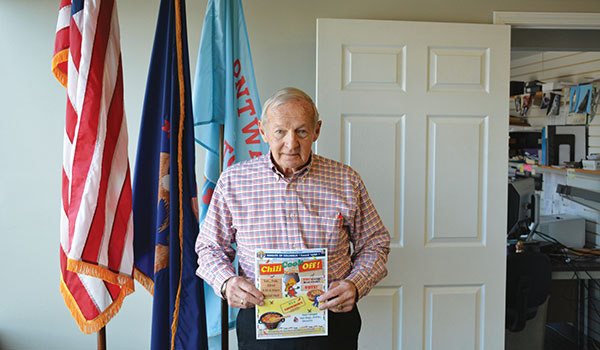 EDWARDSBURG — Some chefs are already chopping onions, dicing tomatoes and getting their recipes ready for a cooking competition that is sure to warm the stomachs of Edwardsburg residents later this month.

At the event, visitors will be able to roam the social hall tasting chilis, and will vote to select the best chili in Edwardsburg from more than a dozen cooks who will be competing for the top prize. In addition, volunteers will be serving hot dogs, chili dogs, beverages and desserts. There is no individual charge, but donations are encouraged, organizers said. With a donation, visitors will be able to taste each entry and will be given a larger bowl to have a serving of their favorite chili.

Throughout the event, the Knights of Columbus will host raffles, with several baskets of prizes that a participant could win. One will include two tickets to “The Lion King,” which will be coming to South Bend’s Morris Performing Arts Center in March.

Now in its ninth year, event organizers said the chili cookoff has proven successful, adding that organizers are expecting between 100 and 200 people to attend.

“It’s a fun event,” said Jerry Marchetti, who is on the executive board of the Knights of Columbus. “It’s a fun night. You get to walk around, taste some delicious chili and get to talk to the people who made them.”

Though Marchetti said he is excited to try all of the chilis that will be competing, he already knows he has a favorite. His wife, Roseann, will be competing the chili cookoff again this year, and he said her chili is hard to beat.

While Marchetti said he is looking forward to the dinner this year, the most important part of the day for him is raising money for the community. Hoping to raise $1,000 at the Feb 22 event, Marchetti said 100 percent of the proceeds would go toward the church and community projects. In the past, the Knights of Columbus have donated to the Edwardsburg Leo Club, the Edwardsburg Vision Project, the annual Christmas tree lighting ceremony and more.

Marchetti said he would encourage anyone to come to the chili cookoff on Feb. 22.

MHSAA to announce status of winter, spring sports by Friday

Gov. Whitmer closes schools for the remainder of the year