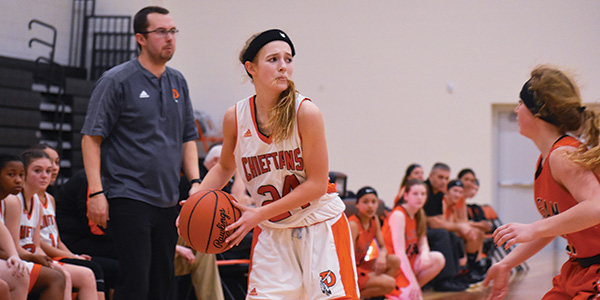 Chieftains come up short against Tigers

This week posed a particular challenge as the team competed against Buchanan on Monday night, and played Allegan the following night with little rest in between competitions.

Dowagiac ended up falling to the visiting Tigers 56-26 in a non-divisional Wolverine Conference game.

“Tonight, was a little rough at times,” Turner said. “We played last night against Buchanan, a really tough team, and had a physical game. It’s tough to come off a game and play back to back games.”

In the Chieftains’ game against Allegan, Dowagiac was first on the board with a shot from senior Greta Whitaker. The team faced some challenges breaking through Allegan’s full-court press. Point guard Allie Conner controlled the ball well against a fast Tiger defense.

Sophomore Makayla Hill, who substituted in for Conner, also controlled the ball well and looked to pass to post player Sierra Carpenter and center, Martha Schaller.

“They all work hard. Every single one of the girls out there bust their butts in practice for us,” Turner said. “They haven’t stopped this entire season. They keep coming to practices and keep working hard.”

In the game, Turner said his team needed to work on attacking Allegan’s defensive gaps.

“We’ve got good ball handlers, but at times we started going sideways instead of downhill, but they worked hard for us tonight,” Turner said of his point guards speed and skill.

Overall, Turner said the team is meshing well, and the players are having fun.

Conner, a junior, scored a team-high eight points in the loss to the Tigers. She had Dowagiac’s sole 3-pointer of the night.

As the season has progressed, Turner said younger players on the team are improving each day.

“We have three seniors and three or four juniors in there,” Turner said of his roster. “A lot of those sophomores at times are leaders, but they are also learning from some of our seniors and juniors, who have been in the program for longer.”

Turner is optimistic about the future of his team and gets excited watching the junior varsity games before his.

“Watching JV and seeing we have eight freshmen down there who come and work hard every single day,” Turner said. “That’s really exciting to see.”

For the remainder of the season, Turner plans to keep his team focused on the same principles they have been working on all year — handling pressure and offensive sets.

The Chieftains will retake the court on Friday against visiting Vicksburg. Tipoff is scheduled for 5:30 p.m. The boys game will follow at 7 p.m.

LETTER TO THE EDITOR: Vote for Dan VandenHeede for State Representative

LETTER TO THE EDITOR: Hearing his master’s voice