CASSOPOLIS — The case for a man who allegedly shot and killed a man in Dowagiac will be moving to trial.

A preliminary examination for Justin Carlton, 41, of Kalamazoo, took place on Wednesday afternoon in Cass County District Court. Carlton is accused of murdering Michael Collins, 40, of Dowagiac, during the early morning hours of Monday, Jan. 27, in the 700 block of Louise Avenue in Dowagiac. Jay Vincent Penar, 38, of White Pigeon, was also charged in the crime.

Wednesday’s hearing was set to determine probable cause in the charges against Carlton, including homicide, conspiracy to commit robbery, armed robbery and unlawful firearm 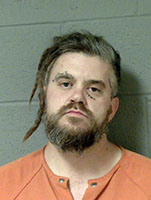 To establish probable cause, testimony was heard from officers who investigated the crime.

Testimony from Officer Matthew Behnke established the location of the body at the time of the crime and a shell case on the couch of a 9-millimeter firearm. Behnke also said a projectile from the bullet was found underneath Collins’ body. Behnke added that Collins’ hands were tied behind his back with duct tape.

“There were zip ties found in the adjacent bathroom to where the victim was located,” Behnke said of the crime scene. “There was a syringe found on the kitchen table. We collected the duct tape from his hands, the bullet and the casing.”

Also testifying was Jason Rutkowske, a detective with the city of Dowagiac, who interviewed Carlton following the incident. Rutkowske said Carlton said he was a sovereign citizen before the start of questioning.

“He advised he didn’t recognize my authority,” Rutkowske said.

Rotkowske said Carlton gave a statement about why he had killed Collins.

“He stated that he had killed the local drug dealer who was robbing all the community, old and young,” Rutkowske said. “He had known this because of the items he had taken.”

Rutkowske shared a direct quote with the court from Carlton.

Ultimately, District Court Judge Stacey Rentfrow agreed there was sufficient evidence to establish probable cause on the charges against Carlton. Rentfrow ruled that the case would move to Cass County Circuit Court.

Following the hearing, Carlton pleaded not guilty to the charges against him, meaning his case will move forward to a jury trial.

Island Park bridge to be improved

NILES — Since Island Park was closed off to the public in February 2018 due to major flooding on the... read more