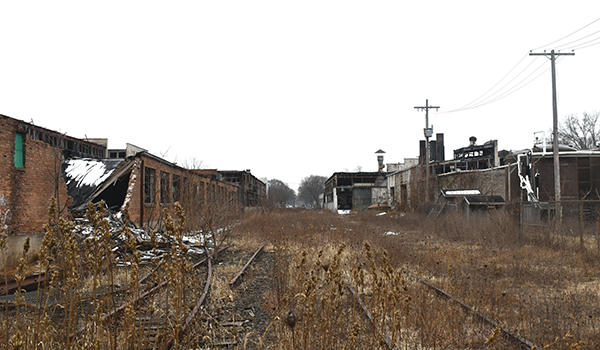 Cards stacked against demolishing blighted complex, but residents are ready to fight

NILES — Blocks of blighted property are just beyond Lindsey and Theodore Schrader’s backyard. The remains of National Standard’s Wayne Street buildings loom behind them, a series of structures that pollute both the eye and the ground.

The Schraders want the site demolished, so they attended Niles council member Daniel VandenHeede’s informational and brainstorming session on the property Monday afternoon.

A dozen community members and a handful of city officials gathered at the Niles Fire Department Complex, 1345 E. Main St., Niles, for a 90-minute session.

The viewpoint on the property was unanimous by all those who spoke: they wanted the site demolished, remediated and at least turned into a field of grass.

The problem, as city officials pointed out, was enticing the company that purchased the National Standard and the blighted property, holding company Heico, to pay for it.

“I’m fearful of what this type of company could do if we push their hand,” said public works director Joe Ray. “There’s kind of been idle threats made.”

Huff said the city has not ignored the property that spans multiple city blocks in VandenHeede’s ward. The city has struggled to find an effective means of forcing National Standard City Complex to act.

The city has sent notices and demolition requirements, but it has not issued a ticket.

When Niles issues a ticket for a blighted home, its owner may be unable to pay, Huff said. Typically, the city then acquires the property and pays the $15,000 or $20,000 usually needed to demolish the home.

Then, Niles typically earns its money — and sometimes more — back through a property purchase.

If the National Standard City Complex refuses to pay or is unable to, Niles becomes responsible for the price tag — $700,000 and $1 million, Huff said.

Huff added that the city has “a hair” over $1 million in its savings, and it would likely be unable to turn a profit by selling the property.

That is partly due to the property being so large, but also because its ground is contaminated. Developing homes or commercial buildings may not be allowed. If they are, the city may oppose the development on moral grounds in the case that the property’s pollution causes harm, Ray said.

Reaching out to federal and state environmental departments to help may be futile, too, Huff said.

“The biggest problem we’re up against in Berrien County is this is a major situation for our community, but it is nothing like what’s happening on the east side of the state,” he said, referring to massive abandoned industrial complexes in the metro Detroit area.

If Niles is able to take Heico to court, Huff said the process would be long, and the city would likely lose — Heico can afford strong lawyers.

City officials were also concerned that Heico could close down the other National Standard factory in town at 1631 Lake St.

Heico has been largely quiet when the city, residents and Niles New Tech students have reached out to the company in the past. Leader Publications could not reach a Heico official for comment at the time of printing.

Despite the struggles the city and has faced, VandenHeede and concerned residents are willing and ready to hold Heico’s subsidiary corporation accountable to clean up their neighborhood.

“At this point, I think our position, the city’s position, is we want someone to finish the job,” VandenHeede said.

After a Facebook video VandenHeede made about the Wayne Street property went viral locally, a Facebook group titled, “Hey Heico! Clean up your mess in Niles!” was created Jan. 30. It now has 230 members.

Since then, it has become a meeting ground for residents to share concerns about the property, share ideas to get Heico’s corporation to pay and a space to find government documents that VandenHeede and others have found.

At Monday’s in-person meeting, options to fight back were discussed in the context of the city’s restraints.

Ideas ranged from hosting protests to notifying associations Heico is part of about its alleged apathy, to taking the risk and having the city issue a ticket.

Some residents said they found hope in a recent Michigan appeals court decision concerning Heico and a business contracted to clean up its Wayne Street property.

Heico was declared responsible for paying more than $200,000 to the contracted business after a dispute between the two entities resulted in the business’ cleanup work remaining unfinished.

However, the contracted business did manage to clear up all asbestos issues on the surface of the property, lessening the financial load some future entity may have to brunt to clean up dilapidated industry.

DOWAGIAC — Six area bands will come together for a day of music and learning at Southwestern Michigan College. On... read more