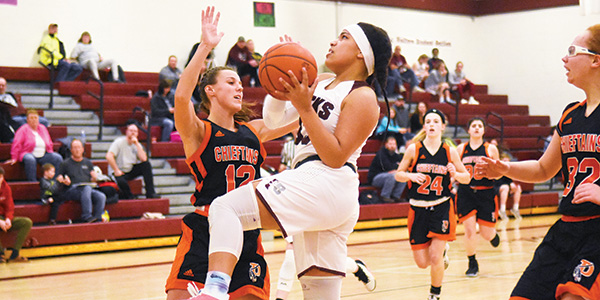 Alea Fisher drives to the basket for two of her 11 points in the Bucks’ 42-22 win over Dowagiac Monday night. (Leader photo/SCOTT NOVAK)

The Chieftains, who snapped a 12-game losing streak Feb. 4 with a win against Bridgman, played one of its best games against a program with a winning record before succumbing to host Buchanan 42-22 in a non-conference contest.

In the end, the Chieftains (1-14) would have no answers for the Bucks’ 6-foot-2 freshman center Faith Carson, who finished the night with a game-high 18 points.

But for first-year Dowagiac coach Jason Turner, the effort his team put in, especially in the first-half, was something the team can build on down the stretch.

“By far our best effort against a quality team,” Turner said. “I told the girls that was the most physical we have played. That is what we have been looking for through the first 14 games. We played physical defense, and we did not back down.”

For the Chieftains, the story was the same, offensively. Buchanan, who came out flat and played that way for much of the contest, was able to knock down a few outside shots, while Carson controlled the paint at both ends of the court. She had nine of the Bucks’ 15 field goals, all of which came from less than 5 feet away.

“That was the difference in the game,” Turner said about shooting the basketball.

Buchanan led 11-4 after one quarter. The Bucks would pull away to a 22-10 halftime lead, and led 35-18 heading into the fourth quarter.

But despite being able to stretch the lead as the game went on, Buchanan never really felt comfortable until the fourth quarter.

Veteran Buchanan coach Gabe Miller felt his team was tired coming off a long weekend, which included a game on Friday night for Winterfest and a dance on Saturday night.

“I am going to chalk it up to being a young team that is still trying to find its way and lacks the focus we need to compete for 32 minutes,” he said.

“We play hard in spurts, but there are still things we have been trying doing since the beginning of the year that are not getting done, and that is going to cost us when we play a better team or play Brandywine in a couple of weeks.”

Alea Fisher was the only other Buchanan player to reach double figures as she finished with 11 points. Emma Lozmack added seven.

Buchanan returns to the hardwood on Friday as it travels to Parchment for a BCS Red Division game.

CASSOPOLIS — Sometimes, when a second chance comes your way, you have to take it. For Ross Beatty Jr./Sr. High... read more