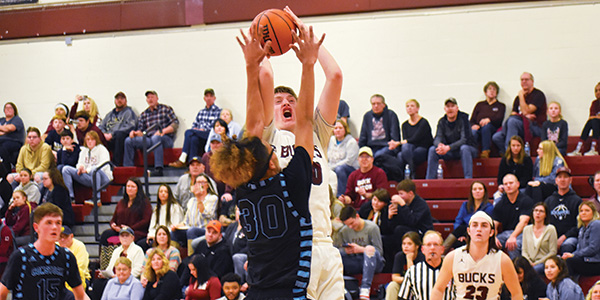 BUCHANAN — Friday night for Buchanan’s boys varsity basketball team meant avenging a loss they had earlier in the season.

Back in December, the Bucks suffered its first road loss, 59-45, of the season to Comstock.

“Comstock is not an easy place to play, especially that early in the season,” said head coach Reid McBeth, following his team’s win. “Playing in front of the Herd is always a bonus for sure.

McBeth said the way his team is playing now is entirely different than earlier in the season. The changes led the Bucks to a 56-38 BCS Athletic Conference Red Division win over Comstock that began in the first quarter and never fizzled out.

An aggressive Buchanan team started its scoring with a 3-pointer from senior Chris Young. Senior Brad VanOverberghe added another three for the Bucks just seconds later after they got back possession of the ball. Early in the opening quarter, the Colts called a timeout as Buchanan opened up an 11-2 lead, which it would turn into 21-7 advantage after eight minutes of play.

McBeth said during the preseason that the program’s defense had not been up to its standards the last several seasons. Now, he is noticing an improvement in his team.

“We work hard every day on defense,” he said. “We played with a lot of effort [tonight] from the start.”

On Thursday at practice, the team tried out a half-court zone defense and decided to test it out against Comstock.

“We haven’t done that defense the whole year,” McBeth said. “It was just something we saw and thought we could have success trying. Our kids played their butts off and made it successful for us.”

The Buchanan girls varsity basketball team defeated the Colts 49-30 in front of a large Herd crowd, but it is still working on balancing two halves.

“I thought we played a good first half,” said Bucks coach Gabe Miller. “In the second half, we came out and made more mistakes than we did in the first half. Sometimes we lack execution, and it shows.”

NOVAK: Lessons to be learned by both

Two things happened Friday night at the Dowagiac and Edwardsburg boys basketball game. They each had a direct effect on... read more