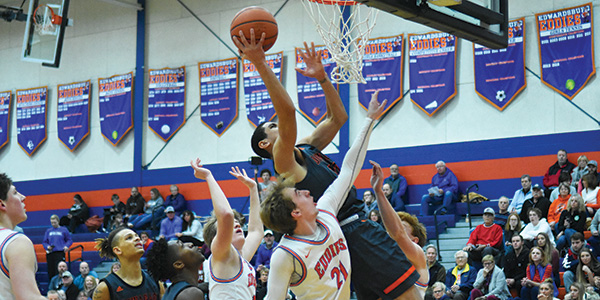 Dowagiac’s De’Ondray Henry goes up for a shot against Edwardsburg in the Chieftains’ 51-45 loss Friday night. (Leader photo/SCOTT NOVAK)

EDWARDSBURG — Veteran Dowagiac coach Danum Hunt and assistant coach Mark Jackson noticed that the practice sessions for the Chieftain boys basketball team had not been crisp as the wins continued to mount.

Hunt and his team talked about getting back to working hard and playing hard following the loss. The Chieftains went back to work on Sunday to prepare for Tuesday’s Wolverine Conference non-divisional game against Allegan.

“We just did not play 32 minutes tonight,” Hunt said. “I tell the guys when you do not give 100-percent maximum effort for 32 minutes, that is always going to be the outcome.”

Dowagiac came out struggling to shoot the ball and did not play well defensively as Edwardsburg forced a game tempo they were comfortable playing. The Eddies also attacked the basket, which Dowagiac was unable to stop pretty much the entire game.

Edwardsburg led 16-8 after one quarter, but had to withstand the lone Dowagiac challenge at the end of the first half when the Chieftains forced the pace and cut the Eddies’ advantage to 24-18.

The Chieftains never made any such run in the second half.

“I think complacency played a part,” Hunt said. “We went on a seven-game win streak there. The fellows got a bit complacent because we had some easy wins in there. The consensus here tonight is we need to get back to work and work harder. I think everyone is on the same page.”

Max Hafner and Zach Strycker both had 10 points to lead a balanced Edwardsburg attack.

The Dowagiac girls basketball team played a solid second half, but it was too little, too lake against host Edwardsburg Friday night.

The Wolverine Conference-leading Eddies raced out to a 22-5 lead and then rotated its starters and subs the remainder of the game in a 59-24 win over the Chieftains Friday night.

Dowagiac (1-13, 0-6 Wolverine South) came out of the locker room focused on playing better basketball in the second half.

The Chieftains did just that, hanging with the Eddies and only getting outscored 18-14 over the final 16 minutes of play, most of which came under the running clock.

“We just did not handle their full-court press very well in that first half,” said Dowagiac coach Jason Turner. “They backed off into the half-court press and we started picking it apart at the end of the second quarter and then again in the second half. We had a good second half in which to build on.”

Abbey Krugh had 16 points for the Eddies.

THREE RIVERS — It came down to the final match of the day, but the Edwardsburg wrestling team was able... read more