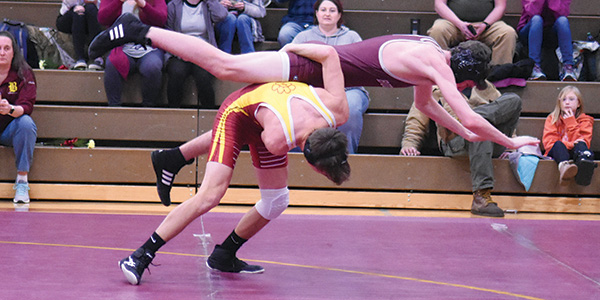 The Bobcats, who had just two seniors in the starting lineup against arch rival Buchanan in their BCS Athletic Conference showdown, rolled to an easy 54-26 win over the Bucks to clinch the regular-season championship.

Veteran head coach Rex Pomranka reminded his team after the match that it was only the first step in being league champions.

“Like I told them, we have half of what we want,” he said. “We just have to keep it going. There were a lot of good things tonight. Some of the matches were closer than I thought they would be. We are going to be back here on Saturday.

Tomorrow we start getting ready, and we are not going to let up.”

The Bucks and Bobcats split the eight matches that were contested on the mat Wednesday night. Brandywine got the better of the points scored in those matches, as they came away with three pins compared to one pin and a technical fall for Buchanan.

The Bucks forfeited five weight classes to the Bobcats.

Pomranka said that his young team has found success this season by working hard and listening to what the coaches are preaching.

“The kids are buying in,” he said. “We changed some stuff, but the young guys are buying in. We had two seniors in the lineup and a couple of juniors, so we are pretty much freshmen and sophomores. We did some work in the offseason, and it is paying off. It has been a fun year.”

The BCS Athletic Conference Tournament is being hosted by Brandywine on Saturday. Wrestling is scheduled to begin at 9 a.m.

Niles wrestlers no match for Lancers

STEVENSVILLE ­— Visiting Niles was unable to bring home a SMAC West Division championship as Lakeshore rolled to a 49-15... read more