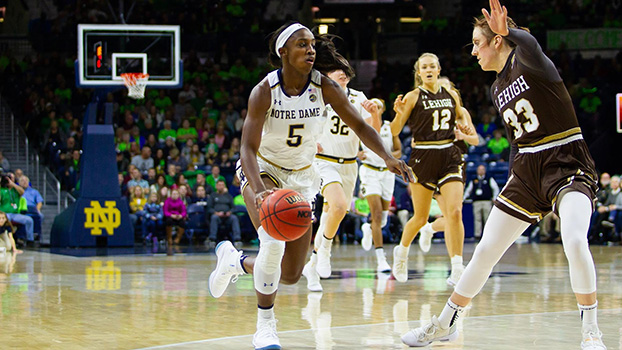 NOTRE DAME, Ind. — With career win No. 900 behind Notre Dame head coach Muffet McGraw, the No. 2 Fighting Irish (12-1) put their sights on the start of ACC play this Thursday.

First up is the Pittsburgh Panthers, who enter the game with a 9-5 overall record. Tip-off is slated for 7 p.m. inside Purcell Pavilion, streaming live on ACCN Extra.

The Irish lead the overall series, 26-3, against Pitt, including a perfect 12-0 mark at home. Last season, Notre Dame earned an 87-53 road victory at Pitt, in which Jessica Shepard and Marina Mabrey combined for 49 points.

With wins over Gonzaga, Drake, Iowa and Marquette, the Irish boast four RPI top-25 victories. To prove that the Irish had a challenging non-conference slate, that number doubles the amount of RPI top-25 wins over the next highest Division I team.

The Irish hot shooting hand continues, for now its four straight games in which Notre Dame has shot over 55 percent: 55.7 percent vs Binghamton, 69.8 percent vs WKU, 59.7 percent vs Marquette and 61.4 percent vs Lehigh. As a result, the Irish have raised its shooting percentage from .489 to .524, which ranks third in the country.

Look no further than the fact that the Irish have recorded four straight games in which they have dished out 25 or more assists, totaling 104 in that span. Notre Dame now averages 19.1 assists per game, which leads the ACC and ranks 12th in the nation. Individually, Jackie Young leads the way, averaging 5.1 assists/game, followed by 4.3 from Mabrey.

Junior guard Jackie Young has been highly efficient from the field this season, raising her shooting percentage to 55.6 percent. That number ranks 43rd nationally, but sixth among guards:

Entering Thursday’s game, Young boasts 994 career points. She would become the 40th member of the program’s 1,000-point club. Once Young reaches the milestone, Marquette and Notre Dame will be the only two schools in the country with five starters over 1,000 career points.

Newest member of the 900 club

Against the very school in which she began her head coaching career, Coach McGraw joined the 900-win club when the Irish defeated Lehigh on Dec. 30. McGraw became the fourth fastest Division I coach to reach the 900-win milestone, doing so in 1,172 games: