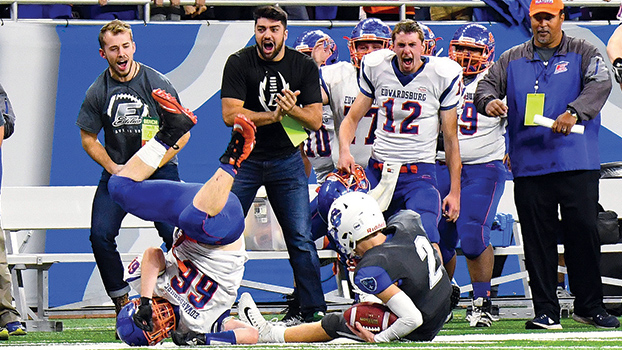 DETROIT — Two teams that know how to create offense and put points on the scoreboard did not disappoint in the MHSAA Division 4 state championship football finale at Ford Field Friday night.

It was the Eddies’ first trip to Detroit in four attempts since 2010.

Edwardsburg came into the game with 5,063 yards of total offense behind an extremely potent rushing attack, using a mixture of running backs and two quarterback system.

Catholic Central entered the contest having generated 4,806 yards of total offense, with senior Fugate the focus of that with 2,752 of those yards.

In the end, it was just too much Fugate, as the Cougars fended off the Eddies, who turned in big play after big play, including a state record-tying 99-yard kickoff return by Caden Goggins, 10 offensive touchdowns and 817 total offensive yards.

“They came out and ran a 6-3 against us, which we have not seen all year,” said Edwardsburg coach Kevin Bartz. “So that first series we were caught a little bit off guard. So, then we had to start changing blocking scheme and plays we want to run. So, as we started figuring those things out that is when you saw the big plays occur.”

After a three-and-out on its first possession, Edwardsburg seemed to find its groove and took a 13-7 lead after one quarter on touchdowns of 55 yards by Kyle Shrider and 64 yards by Chase Sager.

Merick Evans kicked the extra point following the Shrider touchdown, but, in what would be a familiar theme throughout the rest of the game, the Eddies missed the conversion after the Sager touchdown.

“I don’t have an answer, at least not a good one, because we’ve kind of struggled with that all year,” Bartz said. “We made that first extra point, but then we missed the second and now we are playing catch-up. We definitely have to find an answer to that, because that’s kind of haunted us all year.”

Fugate scored the game’s first touchdown on a 20-yard pass from Jake Bowen on the Cougars’ opening possession.

Fugate and fellow running back Erik Grabow scored on runs of 1 and 14 yards respectively to give the Cougars a 21-13 lead at halftime.

Despite the halftime deficit, both teams were fairly even in the offensive categories.  Edwardsburg had 24 plays for 190 yards, compared to Catholic Central’s 25 for 194. However, the Eddies did have the 176-166 rushing advantage.

The Cougars’ offense did not skip a beat after halftime.

Fugate scored on a 5-yard run, his third of the game, with 8:08 to play in the third quarter, as Catholic Central extended its advantage to 28-13.

Down two scores, Edwardsburg needed another big play to get back into the contest.

Goggins delivered with the 99-yard kickoff return, which tied the record held by Muskegon Catholic Central’s Tommy Scott in the 2008 Division 8 championship game.

Again, the Eddies missed the conversion, but they had cut the lead to 28-20 with plenty of football left to play.

The offensive fireworks continued in the fourth quarter, as Shrider raced 78 yards for his second long touchdown run of the game. Suddenly it was 35-25 with 11:47 left to play.

The following Cougar possession had the Eddies faithful cheering, if only for a few seconds.

Catholic Central’s Bowen misread the Edwardsburg secondary and threw an errant pass, which was picked off by Mac Gaideski.

After returning it 10 yards, Gaideski was stripped of the football and the Cougars recovered it back.

Despite the miscue, the Edwardsburg defense stiffened and forced a three-and-out.

With 8:33 left, the Eddies’ Nick Bradley would have his moment. His finals record-tying 90-yard touchdown run would put the Eddies within reach of their first championship, as they trailed the Cougars 35-31.

It looked as though the Edwardsburg defense would force another quick three-and-out, when Shrider and Noah Carrico sacked Bowen on consecutive plays to force the Cougars into a third-and-28 situation.

However, Bowen would find Fugate for 38 yards through the air for a first down, and, two plays later, Fugate scored his record-tying fifth touchdown to end the Edwardsburg comeback attempt

Gaideski would return the ensuing kickoff 46 yards to the Cougars’ 35-yard line, but the Catholic Central defense ended the game the same way it started it with a three-and-out.

Despite the loss, the Eddies performed well in its first trip to Ford Field.

“Defensively I thought we came out in the second half and did a great job,” Bartz said. “We stuffed the run a lot more. The scoreboard does not necessarily show it, but if you take away that big play where we made that big catch on the sidelines and then on fourth down when they got their other long run, it was a great football game.

“We knew it was going to be a battle to the end. We knew they had great athletes. I guess I am just proud of my kids for stepping up the way they did.”

Shrider finished the night with 162 rushing yards and two touchdowns on 10 carries. Bradley added six rushes and 96 yards and one touchdown, while Sager finished with 73 yards on four attempts.

Goggins had 154 all-purpose yards and the one touchdown.

Besides his 306 yards rushing on 36 attempts, Fugate added four catches for 86 yards and one touchdown.

Runners take to the streets to support Niles-Buchanan YMCA